A common offensive technique used by operators and malware developers alike has been to execute malicious code at runtime to avoid static detection. Often, methods of achieving runtime execution have focused on placing arbitrary code into executable memory that can then be executed.

In this article, we will explore a new approach to executing runtime code that does not rely on finding executable regions of memory, but instead relies on abusing existing trusted memory to execute arbitrary code.

Some common methods of runtime execution include:

One common pattern in all these methods is that they have always had a heavy focus on placing arbitrary shellcode in executable regions of memory. Another technique that has not seen significant adoption in the malware community due to its technical complexity is Return-Oriented Programming (ROP).

As a brief summary, ROP is a common technique seen in memory corruption exploits where an attacker searches for “snippets of code” (gadgets) inside binaries that perform a desired instruction and soon after return to the caller. These “gadgets” can then be used in a chain to perform small operations that add up to a larger goal.

Although typically used for memory corruption exploits, there has been limited use in environments where attackers already have code execution. For example, in the Video Game Hacking industry, there have been open-source projects that allow cheaters to abuse ROP gadgets to execute simplified shellcode for the purposes of gaining an unfair advantage in a video game.

The greatest limitation with ROP for runtime execution however is that the instruction set of potential gadgets can be extremely limited and thus is challenging to port complex shellcode to.

As an attacker that already has execution in an environment, ROP is an inefficient method of performing arbitrary operations at runtime. For example, assume you are given the following assembly located in a legitimate binary:

Using ROP, an attacker could only abuse the add eax, edx instruction because any previous instructions are not followed by a return instruction.

On a broader scale, although legitimate binaries are filled with a variety of different instructions performing all-kinds of operations, the limitations of ROP prevent an attacker from using most of these legitimate instructions.

Continuing the example assembly provided, the reason an attacker could not abuse the initial imul eax, edx instruction without corrupting their output is because as soon as the imul instruction is executed, the execution flow of the program would simply continue to the next add eax, edx instruction.

As a general method, the steps to performing Exception Oriented Programming given arbitrary shellcode are:

The flow for the preparation stage of this implementation is as follows:

Once the necessary memory locations have been found, the caller can invoke the arbitrary shellcode by executing the int3 instruction that was returned to them.

Assuming the shellcode ends with a return instruction, eventually the execution flow will be gracefully returned to the caller. A source code sample of Exception Oriented Programming through Vectored Exception Handlers is provided in a later section.

Although Vectored Exception Handlers are great, they're not exactly stealthy. For example, an anti-virus could use user-mode hooks to detect when vectored exception handlers are registered. Obviously there are plenty of ways to bypass such mitigations, but if there are stealthier alternatives, why not give them a try?

Let's say you surround some code with a try/except SEH block. When an exception occurs in that code, how does the application know what exception handler to invoke?

This presents a challenge for Exception Oriented Programming, how do you determine whether a given function is protected by an incompatible exception handler?

To determine if a region of memory is compatible with Exception Oriented Programing:

Once compatible instruction locations are found within legitimate modules, how do you actually perform the Exception Oriented Programming attack with SEH? It's surprisingly simple.

In the example above, the exception filter is the function MyExceptionFilter and the handler is the code that simply prints that it was called. When registering a vectored exception handler, the handler function must be of the prototype typedef LONG(NTAPI* ExceptionHandler_t)(PEXCEPTION_POINTERS ExceptionInfo).

In the code above, the vectored exception handler is invoked using the GetExceptionInformation macro, which provides the function the exception information structure it can both read and modify.

That's all that you need to do to get Exception Oriented Programming working with standard SEH! Besides ensuring that the instruction locations found are compatible, the vectored exception handler is directly compatible when used as an exception filter.

Why is standard SEH significantly better than using VEH for Exception Oriented Programming? SEH is built into the binary itself and is used legitimately everywhere. Unlike vectored exception handling, there is no global function to register your handler.

From the perspective of static detection, there are practically no indicators that a given SEH handler is used for Exception Oriented Programming. Although dynamic detection may be possible, it is significantly harder to implement compared to if you were using Vectored Exception Handlers.

Up to this point, the examples around abuse of the method have been largely around the Windows operating system. In this section, we will discuss how we can abuse Exception Oriented Programming to bypass security mitigations on macOS, specifically parts of the Hardened Runtime.

One security mitigation imposed by the Hardened Runtime is the restriction of just-in-time (JIT) compilation. For app developers, these restrictions can be bypassed by adding entitlements to disable certain protections.

The com.apple.security.cs.allow-jit entitlement allows an application to allocate writable/executable (WX) pages by using the MAP_JIT flag. A second alternative, the com.apple.security.cs.allow-unsigned-executable-memory entitlement, allows the application to allocate WX pages without the need of the MAP_JIT flag. With Exception Oriented Programming however, an attacker can execute just-in-time shellcode without needing any entitlements.

The flow for the preparation stage of this implementation is as follows:

Once the necessary memory locations have been found, the caller can invoke the arbitrary shellcode by executing the int3 instruction that was returned to them.

Assuming the shellcode ends with a return instruction, eventually the execution flow will be gracefully returned to the caller.

Exception Oriented Programming highlights a fundamental design flaw with the JIT restrictions present in the Hardened Runtime. The JIT mitigation assumes that to execute code "just-in-time", an attacker must have access to a WX page. In reality, an attacker can abuse a large amount of the instructions already present in legitimate modules to execute their own malicious shellcode.

Both the Windows and macOS proof-of-concept utilities can be accessed at this repository.

As seen with the new methodology in this article, code execution can be achieved without the need of dedicated memory for that code. When considering future research into runtime code execution, it is more effective to look at execution from a high-level perspective, an objective of executing the operations in a piece of code, instead of focusing on the requirements of existing methodology.

In part 2 of this series, we will explore how Exception Oriented Programming expands the possibilities for buffer overflow exploitation on Windows. We'll explore how to evade Microsoft's ROP mitigations such as security cookies and SafeSEH for gaining code execution from common vulnerabilities. Make sure to follow my Twitter to be amongst the first to know when this article has been published!

Whenever my research leads me to some new methodology I consider innovative, one practice I take is to publish a SHA256 hash of the idea, such that in the future, I can prove that I discovered a certain idea at a certain point in time. Fortunately, I followed this practice for Exception Oriented Programming.

To prove that this hash is a representation of a message summarizing Exception Oriented Programming, here is the message you can take a SHA256 hash of and compare to the published one above.

Since the core idea was published by Matthew, I wanted to share my additional research in this article around stealthier SEH exception handlers and how the impact is not only limited to Windows. In a future article, I plan on sharing my additional research on how this methodology can be applied on previously unexploitable buffer overflow vulnerabilities on Windows. 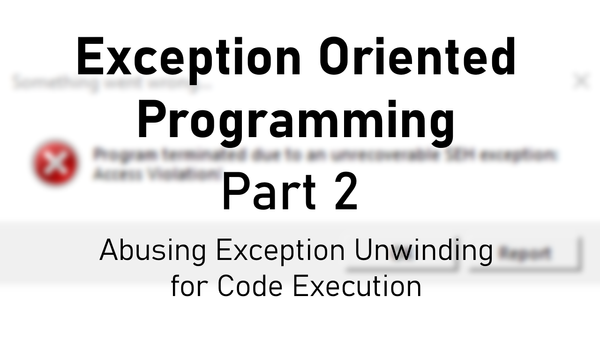 In the middle of August 2021, a special Word document was uploaded to VirusTotal by a user from Argentina. Although it was only detected by a single antivirus engine at the time, this sample turned out to be exploiting a zero day vulnerability in Microsoft Office to gain remote code